N.Y. Building Sites Reopen, Carefully, in Sign of Life Gearing Back Up

N.Y. Building Sites Reopen, Carefully, in Sign of Life Gearing Back Up

More than 5,200 construction projects have reopened in New York City, offering a glimpse of new routines in postpandemic workplaces.

On the Far West Side of Manhattan, construction workers start every morning with a thermal forehead scan to take their temperatures. On service elevators at the high-rise development, they stand on floor markings to maintain social distancing. And when deliveries arrive, drivers stay behind the wheel while the haul is unloaded.

The construction industry, an engine that has helped power New York City’s tremendous growth in recent years, is slowly starting to reawaken, offering one of the first optimistic economic glimmers as the city struggles to recover.

And it also provides a glimpse of how the coronavirus pandemic has fundamentally changed the workplace in the nation’s largest city and the epicenter of the outbreak.

“I would have to say that the industry has evolved very rapidly to adapt to our current environment regarding the coronavirus,” said Gary LaBarbera, the president of the Building and Construction Trades Council of Greater New York, which represents more than 100,000 union members.

Across the city, laborers are wearing respiratory masks not only while working but also during breaks. They are disinfecting their tools, something rarely done before, and contractors have installed additional hand-washing stations.

The most significant changes, perhaps, could still be on the way. Representatives of labor groups and contractor companies are pushing the city to permit 24-hour construction at some locations to reduce the number of laborers on site at any one time. 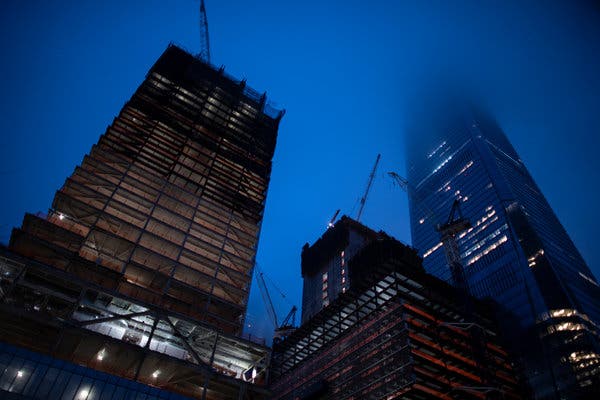 The rapid adjustments, while not universal across all job sites, have been embraced in an industry that prizes safety but has notoriously dirty job sites, often with few portable restrooms and no running water. Crews often share tools and work side by side.

The changes were enacted only after construction workers spoke out in mid-March over workplace conditions, including a lack of protective gear and a reluctance to enforce health measures like social distancing.

A month later, roughly 85 percent of the construction sites in New York City that were operating before the pandemic have come to a halt after the state revised its order and deemed them nonessential. But every day hundreds of job sites have opened back up as developers, contractors and labor groups have lobbied officials to get them running again.

Roughly 5,200 construction projects were operating again as of Tuesday, from the Spiral office tower at Hudson Yards on the Far West Side to One Vanderbilt near Grand Central Terminal and home renovations in Far Rockaway, Queens.

Governor Andrew M. Cuomo announced recently that the construction industry would be among the first categories of “low-risk” businesses allowed to return to normal as part of the state’s phased reopening scheduled to start as soon as mid-May.

But some workers are dubious that work could soon resume safely.

“There is no social distancing on a construction site,” said a carpenter who was told that his job site, a new hotel in Midtown Manhattan, would reopen on Wednesday.

When the site reopens, it will have a turnstile to control who enters, additional hand-washing areas and running water, the contractor told the site’s workers, according to the carpenter, who requested anonymity because he did not have permission to speak with the news media.

“They want to do all these protocols but nothing has been implemented yet,” the carpenter said.

A site in Boerum Hill, Brooklyn, where a new single-family home is being built, was allowed to stay open until construction reached a point where it could be safely closed.

“I saw more construction workers on the way into work than I’ve seen in a month,” said a construction superintendent at the site, who requested anonymity to discuss safety measures there.

Four laborers, two on each floor, have their temperatures taken in the morning and are reminded to stay six feet apart.

The city’s Department of Building said inspectors were monitoring construction sites, making sure that workers at open sites were practicing social distancing and that those deemed nonessential remained closed.

Inspectors have also visited every closed construction site, roughly 30,000 of them, at least three times since the governor restricted construction work at the end of March. Of those sites, at least 115 were open and received violations, the department said.

“There is absolutely no excuse for conditions that put workers, and therefore our entire city, at risk of spreading Covid-19,” Melanie E. La Rocca, the Building Department commissioner, said in a statement. “Lives are at stake.”

As job sites come online, they look different in small but meaningful ways. The morning huddle and debriefing are now held in smaller groups. Hand-washing areas have been added to multiple floors, instead of only one on the ground floor.

During breaks, workers are encouraged to stay in their area with distance between one another and avoid congregating.

More telling perhaps, both contractors and labor groups are encouraging workers to speak up and stay home when they feel sick, an enormous cultural shift for workers accustomed to pushing through pain and illness.

“People’s attitudes have changed,” said Christopher A. McFadden, a vice president at Turner Construction, which is building the Spiral, a 1,005-foot-tall office tower in Manhattan. “Part of looking out for each other and caring for your work group is staying home when you are sick.”

The gradual reopening is part of a broader campaign by the construction and real estate industries to portray their work as vital to sustaining an economy currently on life support and fast-tracking its rebound.

As part of that, construction unions and contractors, often at odds over contractual disagreements, have been negotiating major changes.

The two sides are discussing new work schedules, including staggered start times to avoid a rush of workers at the same time.

Most significant, the groups have been discussing a plan to allow round-the-clock construction at some projects. The city only allows construction to take place between 7 a.m. and 6 p.m. on weekdays without a special permit.

Allowing 24-hour construction would mean fewer workers on site and near one another, the groups said. To avoid disrupting people working from home and incurring noise complaints, the 24-hour schedule would be permitted only at some sites after securing city approval. (A spokeswoman for Mayor Bill de Blasio said that allowing 24-hour construction “is not currently being discussed.”)

“There is going to be a lot of thinking long term about how we restructure what we do,” said Carlo A. Scissura, the president of the New York Building Congress, a trade group.

By its very nature, a lot of construction work is incompatible with concepts like social distancing. Installing walls, for instance, can require multiple people to work side by side. At a project next to Barclays Center in Brooklyn recently, a cluster of workers wearing masks huddled together to install a scaffolding base.

Turner Construction said that it had started to review the entire supply chain of construction projects, looking to reduce the need for workers to be in proximity to one another. Some parts could be prefabricated in a factory, shipped to a job site and then installed with fewer workers, the company said.

Suffolk Construction Company is planning to roll out new technology at construction sites, including thermal scanners, which can remotely detect a fever in a worker without using a hand-held tool.

Workers will also attach a device to their hard hats that will track their movements and sound an alarm when they get within six feet of a colleague.

Over time, the company said, data collected from those devices will allow the company to learn how people work and modify the workplace to keep people separated.

The company consulted with an engineering professor in Singapore, where the construction industry has used the remote temperature-taking devices.

“If you think about the challenge we face right now,” said Alex Hall, an executive vice president at Suffolk Construction, “we need something that gives us multiple almost simultaneous readings. We have to be attacking this on multiple fronts.”