The passenger rail company with dreams of connecting Miami to the Orlando area has been busy this fall laying a second railroad track through northern Palm Beach County. 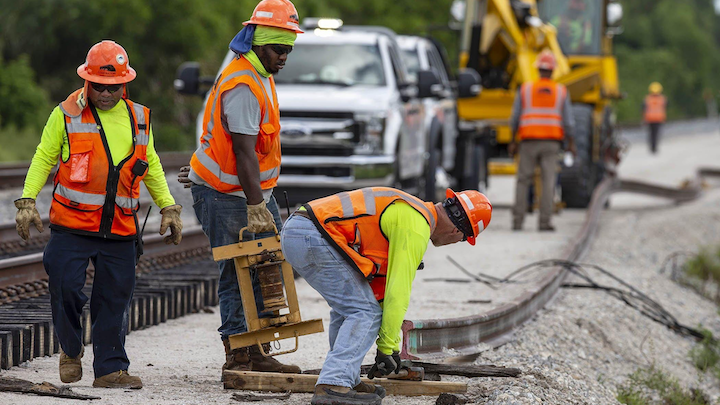 JUPITER — If you’ve seen the railroad construction lately along Alternate A1A, you probably know what it means.

The passenger rail company with dreams of connecting Miami to the Orlando area has been busy this fall laying a second railroad track through northern Palm Beach County. Service to Orlando is unlikely to begin until at least late 2022, but Jupiter officials are already at work hashing out how the high-speed rail line will look in town.

Fences, landscaping and a quiet zone are all on the table. Officials discussed their plans at a Jupiter Town Council meeting earlier this month.

Both Jupiter and Brightline have looked into the possibility of adding fences immediately north and south of Indiantown Road next to the Pine Gardens North and Pine Gardens South neighborhoods, according to town staff.

More: Tri-Rail comes roaring back – and so does noise, keeping Montecito residents up at night

Brightline also wants fencing north of Riverside Drive in the industrial area around Cypress Drive, according to the town.

Councilman Jim Kuretski said in an interview that he expects Brightline to accommodate Jupiter’s requests. Brightline leaders, while open to fencing, have been somewhat tepid about adding much of it in the past.

“Pine Gardens South there has a bunch of kids,” Kuretski said. “Why not? What’s the cost of fencing versus the cost of a life?”

Councilman Ron Delaney acknowledged a lukewarm reaction to Brightline in town, but he said the company and Florida East Coast Railway essentially have the leeway to do what they want with the corridor, which FEC controls.

“It’s an ongoing process of cooperation,” Delaney said. “We’re hoping they’ll join us in the effort to put the fencing up.”

More: ‘We’re hurt and disappointed’: Jupiter Farms family is the target of another racist attack

Jupiter’s leaders also plan to enact quiet zones in town, but this requires Federal Railroad Administration approval and is no slam dunk. The application process for Boynton Beach took more than two years.

Kuretski hopes to have the policy set up before Brightline trains starting passing through Jupiter, noting that many of the required technical upgrades at rail crossings are in progress.

But he cautioned residents not to expect total silence. Train conductors can still blow their horns, they just won’t be required to.

Heading north from West Palm Beach, Kuretski said he expects the trains to enter Jupiter’s south end around 110 mph, gradually slowing down to around 60 mph just south of the Loxahatchee River rail bridge.

Brightline is underway on a $34 million effort to effectively replace that 95-year-old bridge, which crosses the Loxahatchee parallel to Alternate A1A. Construction there is expected to last through February 2022.

The bridge project has gradually grown in scope. Brightline recently decided to replace most of the span’s concrete foundations, spokeswoman Katie Mitzner said.

“As we work on these projects, obviously there are a lot of moving parts,” she said.

The Jupiter Inlet District is contributing roughly $1.6 million toward the project, with an identical sum from a Florida Inland Navigation District grant. The money will go toward increasing the vertical clearance of one of the bridge’s segments from 4 feet at high-tide to roughly 8 feet, said Joseph Chaison, the district’s executive director.

Brightline has estimated the increase will allow 70-80 percent of boats to pass through when the bridge’s bascule is down.

While construction is happening, though, Mitzner said there will likely be periods when the main boating channel will be impassable. Whether a detour will be available is still being determined, she said.

But, Mitzner cautioned, “there will be an impact to boat traffic.”

All Aboard Florida, which operates Brightline, is owned by an affiliate of Fortress Investment Group LLC, a global investment management firm. Fortress also is contracted to manage and advise New Media Investments Inc., which owns Gannett, the parent of The Palm Beach Post.