Between now and 2050 if construction trends continue, we will likely double the square footage of the built environment. In this short time period, half of the new construction emissions between now and 2050 will be from embodied carbon. Therefore, building owners, developers, designers, and contractors must take action and broaden their focus to include embodied carbon as part of a holistic look at sustainable design.

With this focus on embodied carbon, carbon reductions for concrete have become a focal point for the industry. Concrete is one of the world’s most ubiquitous and oldest materials, and the second most used substance on the planet, after water, according to Eco-efficient Cements: Potential Economically Viable Solutions for a Low-CO2 Cement-based Materials Industry. It is also one of the most impactful materials to our environment. Cement production is an extremely carbon-intensive process because carbon is emitted due to the high heat required in the process as well as during the natural part of the chemical reaction. The result is an extremely carbon-intensive process that accounts for 4.4 billion tons of carbon dioxide year and the distinction of being the world’s second-largest CO2 emitter, as noted in the research Making Concrete Change: Innovation in Low-carbon Cement and Concrete.

Recognizing this impact and responding to changing trends in construction, many concrete technologies have emerged in recent years to tackle carbon reductions in concrete products. 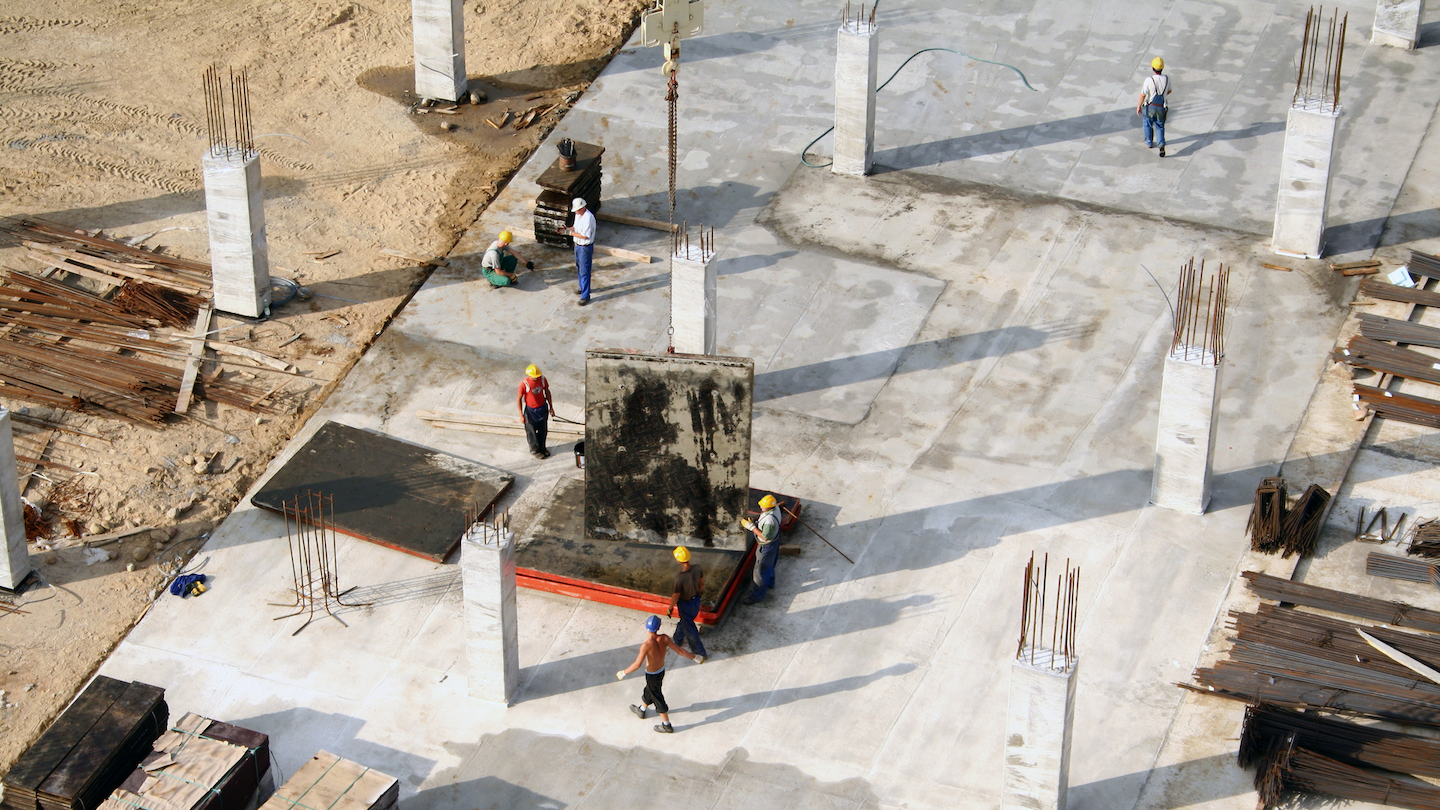 Availability and acceptance will be barriers to any emerging technology, consistent requests from specifiers for new materials may hasten availability and research. Another concern is “franken-concrete,” which may combine multiple new technologies and materials thus resulting in concerns about long-term durability and the potential end of life issues. Bigstock

The first step to reducing the carbon impact of concrete that can typically be done on every project is to optimize portland cement usage. Concrete specifications should be performance-based and written to state what strength is needed for each element type. For example, considering the amount of time needed for the concrete to reach maximum strength in regard to elements such as foundations, columns, and shearwalls can lead to mix designs with less Portland cement. Additionally, cement may be reduced in some regions by specifying higher quality aggregate or using less water. In general, mix optimization is key and engineers should ensure their specifications allow mix designers the ability to minimize carbon impact by only specifying the performance requirements necessary for each structural element.

Project Drawdown, a comprehensive plan to reduce global warming, identified using Cement Alternatives as strategy #36 and estimated a potential carbon savings of 440 million tons of carbon dioxide emissions annually if the strategy were implemented. Several well-known cement alternatives such as fly-ash and ground granulated blast furnace slag have been successfully used for decades and are common in modern mix designs. In the short-term, while other cement alternatives are being researched and introduced into the market, maximizing the industry’s use of readily available cement alternatives such as fly ash and slag is one of the most important steps engineers can take to reduce concrete’s carbon impact.

Meanwhile, other cement alternatives are emerging to bring even more options to the market.

Several other materials such as plastics, glass, foams, and paper have been proposed as aggregate substitutes in concrete, but most cannot be used without compromising strength and durability. Additionally, because 95% of the carbon impact of concrete is due to the cement, there is less efficiency in focusing on aggregate substitution. Although not a cement alternative, the concrete industry is also seeing a surge in the specification and use of Type 1L cement. Type 1L cement meets ASTM C595 and is essentially a blend of cement and naturally occurring limestone. Due to the natural limestone component, Type 1L cements have a lower embodied carbon than typical cements yet have very similar performance characteristics. Typical limestone component makeups for Type 1L cements are usually in the range of 10-15%. 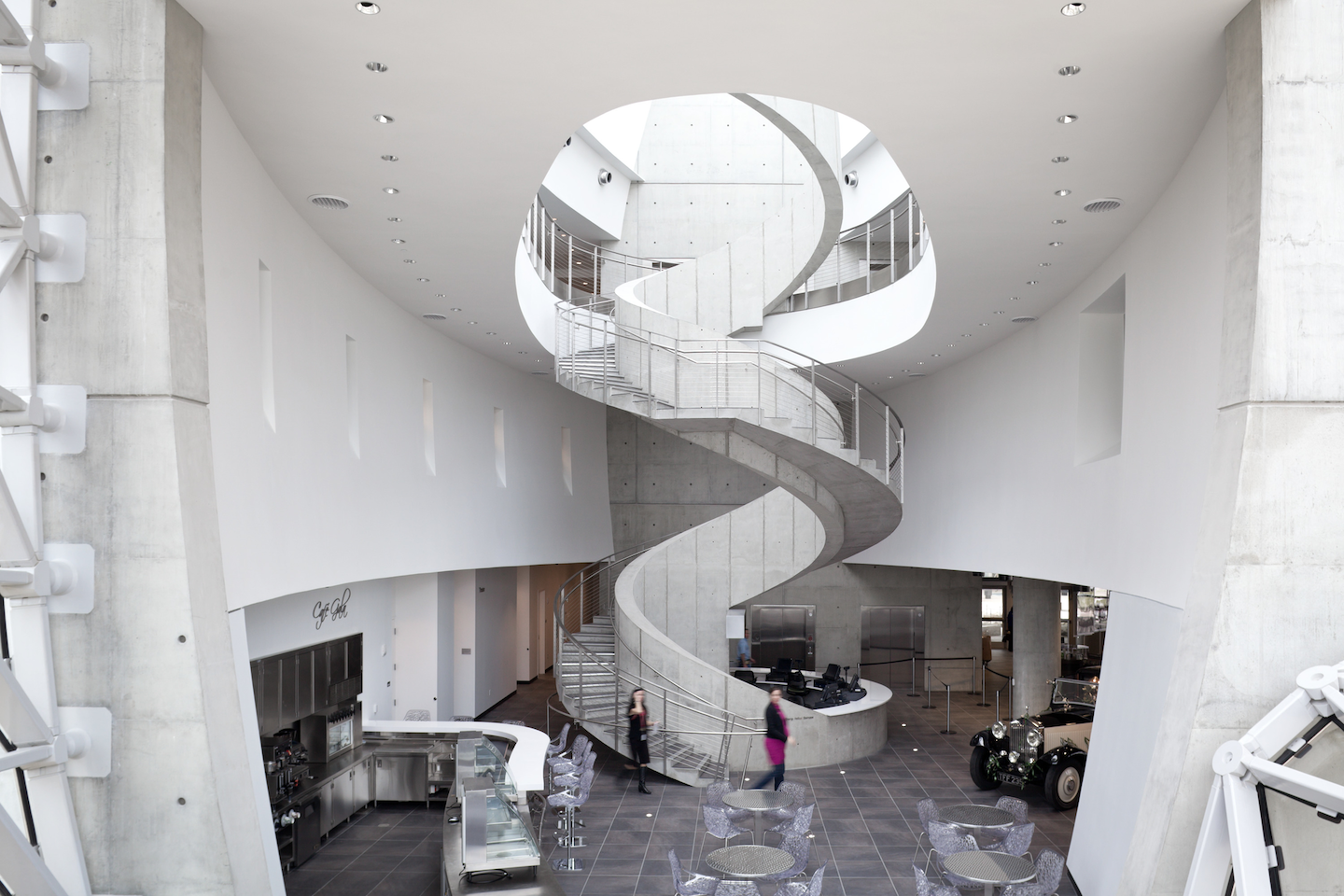 The concrete staircase inside the Salvaldor Dali Museum, St. Petersburg, Fla., explimplifies creativity in the reduction of embodied carbon. Reportedly, its design was inspired by DNA and the Finonacci sequence; was poured in place; and is 75-ft. tall. The concrete used in the museum’s construction was as environmentally friendly as possible using flyash while the rebar was 97% recycled steel. Moris Moreno Photography

Another emerging technology in concrete production is to utilize carbon sequestration and injection. Technologies such as CarbonCure, CarbiCrete, and Solidia have been emerging in markets around the country.

Nationally, Walter P Moore used CarbonCure on a variety of project types and concrete applications. For a commercial office building development in Atlanta, our team was able to work with the concrete supplier for the drilled pier foundations to inject CO2 into the concrete mixture at the batch plant and reduce the cement content by 7% for that application. This technology and technologies similar to it, when used in combination with other cement alternatives such as traditional supplementary cementitious alternatives can help project teams achieve embodied carbon reduction goals on their projects.

In order to evaluate the relative environmental impact of different technologies and cement alternatives in various concrete mixtures, it is important to have environmental product declarations (EPDs). EPDs quantify the environmental impact of materials across multiple environmental categories including global warming potential. While different technologies and cement alternatives can each tout their benefits, their proven impact is truly only verifiable with mix-specific EPDs. The demand for product-specific EPDs on projects is certainly growing and producers should expect to see this more and more in specifications in the coming years.

While availability and acceptance will be barriers to any emerging technology, consistent requests from specifiers for new materials may hasten their availability and research. Another concern is creating “franken-concrete” that may combine multiple new technologies and materials thus resulting in concerns about long-term durability and the potential end of life issues, which will require more research.

To tackle embodied carbon on our projects, the carbon emissions from concrete must be considered every time as it can be found on every single project. To make a meaningful impact, most projects will need to take a multi-faceted approach by incorporating cement reduction, cement replacement, and a variety of new technologies. As concrete designers, producers, and specifiers; we need to be nimble, willing to think outside the box, and consider new technologies as they arise.