Bitcoin? Blasé. Gold? Going out of style. “The hottest commodity on the planet,” according to Dustin Jalbert, an economist at the market-research firm Fastmarkets, is lumber.

In North America, lumber is typically traded in units of 1,000 board feet; builders need about 15,000 board feet, on average, to construct a single-family home. From 2015 to 2019, lumber traded at $381 for 1,000 board feet, according to Fastmarkets. This month, it reached an all-time high of $1,104 for the same amount. The lumber shortage has added at least $24,000 to the cost of a new home, according to the National Association of Homebuilders.

On its face, the surge in lumber’s price has a simple explanation: Demand for wood is really high right now. Over the past year, Americans have bought new homes, started renovations, and embarked on DIY projects at stratospheric rates. But the lumber story is not simply about record-breaking demand. The spike has hit just as lumber supply is dwindling and undergoing a major transition, analysts and scientists told me.

Since 2018, a one-two punch of environmental harms worsened by climate change has devastated the lumber industry in Canada, the largest lumber exporter to the United States. A catastrophic and multi-decade outbreak of bark-eating beetles, followed by a series of historic wildfire seasons, have led to lasting economic damage in British Columbia, a crucial lumber-providing province. Americans have, in effect, made a mad dash for lumber at the exact moment Canada is least able to supply it.

Climate change, which has long threatened to overturn dependable facts about the world, is now starting to make itself known in commodities markets, the exchanges that keep staple goods flowing to companies and their customers. For years, scientists and agricultural forecasters have warned that climate change could result in devastating failures among luxury goods, such as fine chocolate and wine. Others have speculated about several grain-producing regions slipping into a simultaneous drought, a phenomenon dubbed “multiple breadbasket failures.” But for now, a climate-change-induced shortage is showing up more subtly, dampening supply during a historic demand crunch.

“There are people who say, ‘Climate change isn’t affecting me,’” Janice Cooke, a forest-industry veteran and biology professor at the University of Alberta, told me. “But they’re going to go to the hardware store and say, ‘Holy cow, the price of lumber has gone up.’”

When you ask lumber economists about this year’s astonishing price run, they tell a story that you can summarize with three D’s: DIY, demand, and demography. When the economy shut down last spring, sawmills across North America planned on a long-lasting and deep recession. They slowed production lines and paused up to a third of their lumber production, according to Dustin Jalbert, a wood-products economist at Fastmarkets.

“But then things rebounded very rapidly,” he told me. First came the DIY projects: Stuck at home, flush with cash, and with nothing else to do, homeowners embarked on gardening or deck-building projects that they had been putting off. Then, as the pandemic dragged on, demand for private indoor space increased. Many families suddenly needed more from their house than they had ever needed before. “They’re working from home, and they have kids working from home, so now they need an extra room or two,” Jalbert said. Normally, homeowners would respond to a sudden need for more shelter by trading up, moving out of their home and buying a larger one. But because everyone needed more space at the same time, home inventory strained, and home prices started to rise.

Those who braved the housing market soon discovered the final problem: demography. My generation of Americans—the core cohort of Millennials, born from 1988 to 1992—is turning 30 and entering our prime home-buying years. Millennials are passing through the U.S. economy like an elephant being digested by a boa constrictor. Just as we stretched public-school systems in the 1990s and inflated the urban apartment market in the 2010s, we are now trying to buy more houses than exist to be sold. Last year, American homes spent an average of 25 days on the market, and that number has continued to fall.

This has produced a surge in home construction—and with it, a need for Canadian softwood lumber. Among builders, the preferred “species” of wood for framing homes is called Canadian SPF, or Canadian spruce-pine-fir, Jalbert said. As its hyphenated name gives away, SPF is not a single species of tree, but a catchall industry name for conifers grown in the northern boreal forest. If you’re in a relatively new American home or low-rise building right now—or if you can see one out the window—there’s a good chance it’s made of SPF imported from Canada, specifically British Columbia or Alberta.

Canadian SPF is grown in orderly tracts of forest that span much of Canada’s northern belt. Starting in 1999, an outbreak of bark-eating mountain pine beetles has ravaged conifer forests across the American and Canadian West. It has been especially bad in British Columbia, which exports about half of its lumber to the U.S.

“The mountain pine beetle has been a force of nature in this current epidemic,” Cooke said. The beetle has devoured 18 million hectares of forest in British Columbia alone, killing 60 percent of its merchantable pine. The outbreak has been accelerated by “weather associated with climate change,” Cooke said. A series of unusually warm winters has failed to kill the usual number of mountain pine beetles, allowing populations to swell to unprecedented size. Nor have two decades of unusually dry and drought-ridden summers helped. When trees are drought-stressed, they’re less able to mount a defense to the beetle, and they succumb more quickly.

Across North America, the woodland affected by the beetle—a tract stretching from Montana to Saskatchewan—totals 27 million hectares, an area more than three-quarters the size of Germany.

The outbreak has required quick thinking from regulators and lumber companies. In the early years, British Columbia “went into salvage mode,” Cooke said. Loggers followed the path of the beetle, felling dead trees as quickly as they could. If collected in the first year or two after dying, beetle-blighted timber is essentially as high-quality as freshly felled trees. “But the longer it stands dead, the less useful it is,” Cooke said. “You can use it for pallets and pellets, but not that nice construction-grade timber.” At the same time, loggers cleared around the affected forest, hoping to cut off the outbreak’s expansion.

This approach worked for more than a decade. As the outbreak expanded, the province maintained its lumber production. But trees take a long time to grow in the harsh climes of British Columbia. With its bountiful sunlight and warm, wet weather, Florida can grow a pine to merchantable size in 15 years, but “in 15 years, a tree is not much taller than me here,” Cooke said. Canadian forests take 40 to 60 years to reach maturity. Looking ahead, British Columbia foresaw a production gap, a decades-long span when it would have no trees to harvest. That shortfall was predicted to begin about now.

“That was all fine. Salvage was going along,” Cooke said. “And then we had the forest fires.”

In 2017, British Columbia recorded the worst wildfire season in its history. Fires cleared 1.2 million hectares of land, or more than 1 percent of the province’s area, and forced 65,000 people to evacuate. That record was surpassed the following year, when 1.3 million hectares burned. Worst of all, the fires struck with awful efficiency, consuming exactly the forest that the salvage plan had saved for last. They “burnt the last-standing dead supply,” Cooke said. British Columbia’s lean time had arrived early.

The fires were made more likely by climate change, but—in an ugly feedback loop—the beetle outbreak also contributed. When conifers are attacked by pests, they secrete more pitch in self-defense, Cooke said. Pitch is extremely flammable. When trees are drought-prone and filled with pitch, it’s like “fire starter on the landscape,” she said. (Nor is wildfire the only risk of pitch: British Columbia sawmills and pulp mills have exploded while processing pitch-loaded wood, Cooke said.) 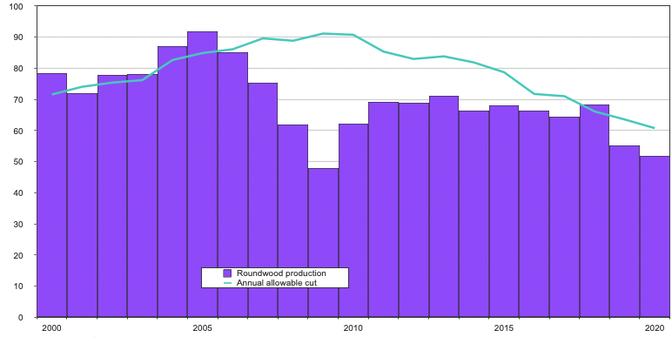 The provincial government has curtailed allowable timber production by a third since 2009, according to Fastmarkets. It has lost 2.5 billion board feet of annual production capacity since 2019, enough to shift prices in a North American market of 70 billion annual board feet, Jalbert said. In the past two years, about 30 sawmills have closed in British Columbia. Other factors in 2019 made the local industry’s crash especially sharp: A sluggish housing market and American import duties helped suppress demand too.

Which brings us to the pandemic. When demand rebounded almost instantly, sawmills rushed to catch up. The lack of swing capacity in British Columbia hasn’t helped. “I think it’s pretty clear that the beetle kill in and of itself is creating a supply shortage in the market for logs in a critical supplying region to the U.S.,” Jalbert said.

This has led to higher prices for American consumers, but the economic damage is worse in British Columbia. In Cooke’s hometown of Prince George—located in “the belly button of British Columbia,” as she put it—four pulp mills used to run 24/7. They now work with smaller shifts and close at night. It’s one sign of the climate-weighted damage to come.